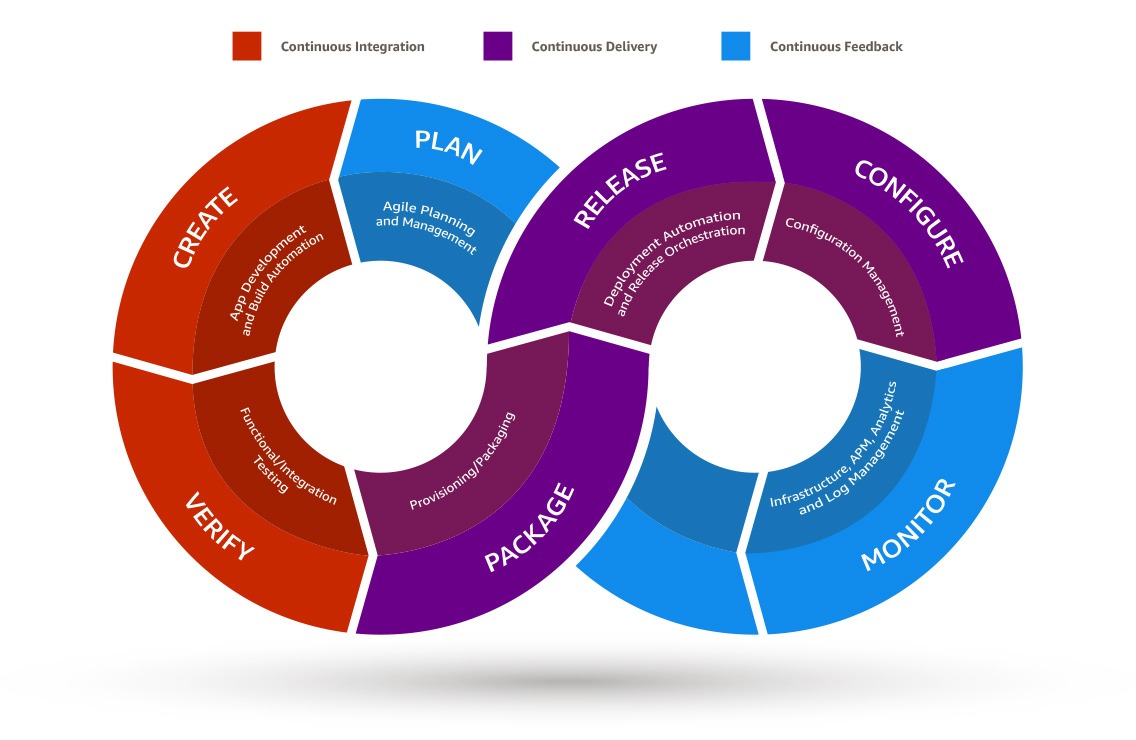 Today is a world of speed, speed, and so much more speed. Along with the fast-paced life of the gen-Y, it is no brainer that the need for speed is also the call of the day. We are practically ‘living online’; yes, it is safe to say that the internet and Artificial Intelligence have somehow taken over our lives while we were busy speeding ahead. Though one cannot deny the fact that, it has also made many things possible to be controlled with just a simple click of an icon. Be it your clothes, medicine, files, documentations, booking a cab or service, food, gadgets, flights, buses or trains or anything imaginable is present right there when and where you want it to be. However, the restless human mind is never quite a peace and there still remains a quest for a much higher velocity to the way things are executed in the manner presently. Amongst the many innumerable software, programs, and tools, we have the AWS DevOps. What are these terms and where do we use them?

How did they come to be and what is their purpose? Let us explore further and learn more.

DevOps is the ‘technical’ acronym for development and operations. This is a software development process or a language, which connects the two units, i.e the ‘development’ and the ‘IT’ operations. The main purpose of DevOps into being is to smoothen the collaboration between these two very different units and making a common platform of communication between the two. One can also say that DevOps is a ‘unit’ where processes, people and the product get together to form a single working body. This is enabled in order to offer a continuous flow of values to the users at the end of the ‘flow’ or the ecosystem. The importance of DevOps lies in the fact that it is used to enhance the function of the flow of services and applications at a much higher speed than the normal.

So, what do we mean when we say ‘AWS DevOps’? Let us find it out.

AWS is a technical acronym for Amazon Web services. This is a service that offers support to DevOps in order to build, store and deploy the various applications. This also includes the utilization of management tools such as ‘Chef’. A chef is a form of configuration management tool which helps in the set up of machine when done on physical servers, Cloud and other virtual machines. This is a software used by technological giants in order to offer better management of their infrastructure. The use of AWS is widespread and quite critical when it comes to initiating the speed in various systems and software application release management process. The purpose or the main connection between AWS and DevOps is to support by offering the services that are required to be built, store and deploy the numerous applications. Here AWS is important as it helps in the application of ‘automation’ so that manual tasks and the overall process of building up can be done with efficiency and lightning speed. Also, various other processes such as container management, configuration management, test workflows can be done by utilizing AWS and DevOps.

Now, when speaking of utilizing AWS DevOps for cloud build; what does the term ‘Cloud build’ stand for? Let us find out.

Cloud build is the term used when your ‘builds’ are executed on the Google Cloud Platform ecosystem or flow. The importance and the use of Cloud build are many and quite vital in the overall execution of AWS DevOps. The basic function is to import the source code from Google cloud storage, GitHub, Cloud Source Repositories, to be able to execute a build according to your specifications, and to be able to make artifacts like Docker containers or java archives. The other basic importance of cloud build is to be able to initiate quicker, continuous and more dependable builds in all languages. Cloud build also helps import source code from various storage spaces. Through the application of Cloud Build one creates the required software faster and more effectively. This is also done in multiple languages If required. By using the application of Cloud Build, the user can gain control over custom workflow through the various environments like serverless, Kubernetes, Firebase to name a few. The development of Cloud Computing allows the user to access all their database and applications over the web or the internet. Speaking of which it is the work of the cloud computing provider to be able to maintain all the hardware which might be required for the smooth running of your web applications.

So, now that we know what an AWS, DevOps, and Cloud build is all about, let us find out the best tools that are required for deployment and cloud build likewise:

Much similar to the Jenkins Pipeline, this AWS DevOps tool for cloud build and deployment helps to allow an actual or a visual view of the end to end delivery process.

The following are the configurations for the AWS Code pipeline

This is the type of AWS DevOps tool for cloud build and deployment where a security online version control service that has the capability to host private Git repositories. Here, it is easily possible for the team to not have to go all the way to maintain their own version control repository as they can simply utilize the AWS Codecommit in order to store their source code. This AWS DeOps Tool is also used to store binaries like WAR, JAR, EAR files generated from the build.

It has been observed that the source code and project artifacts are stored in the AWS CodeCommit repository. In order to be able to create a continuous implementation of integration, AWS Code Build like Jenkins allows the latest variations to occur from the AWS CodeCommit or GitHub repository as configured and created on the build specification YAML file. These commands created are run based upon the four different phases like the Install, Pre-build, and post-build. Once created the artifacts i.e WAR, ZIP, JAR, the EAR is safely stored in the AWS storage which is also known as the S3 bucket.

This is the deployment service which causes the automation of deployment. This AWS DevOps tool for cloud build and deployment is used in order to store the artifacts in S3 buckets. This is completed using the AWS code build. The YAML file known as the appspec.yml is the main feature upon which the AWS Code Deploy depends upon.

The above-mentioned tools, services are some of the basic facts about the AWS DevOps tools for cloud build. One can also generalize the fact that DevOps is the common ‘opera’ of operations and development engineers to be able to take part together to form a lifecycle or an ecosystem. This takes place from the development process to production support. The other main characteristic of utilizing DevOps is also the fact that it is characterized by the operation staff and the developers utilizing the same techniques.

As a DevOps Engineer it is also important to have a few qualities and features like:

A good DevOps engineer would require proper scripting skills, as this is quite important in the DevOps Process and tool development. Also, for the process of being able to create proper AWS DevOps tools for cloud building a good engineer will also have to showcase proper decision-making skills. Also as mentioned earlier, coding is an ongoing process and needs constant updating, for this one requires a good amount of infrastructure knowledge as well. These are also required, the soft skills and various other instruction based information to implement the right kind of knowledge when and where it is required.